This fall, we did some cleaning, organizing, and re-shuffling of the iEARN-USA office in Manhattan. It ended up making sense for the tech team to move into its own corner of the office, so I got a chance buy some furniture and craft up a new space for us.

I’m trying to be better about posting more, so here’s a photo from my iPhone because waiting until I bring my DSLR into the office will mean I’ll never post this. It’s nothing magazine worthy, but it makes me a bit more proud to come in and work here every day. 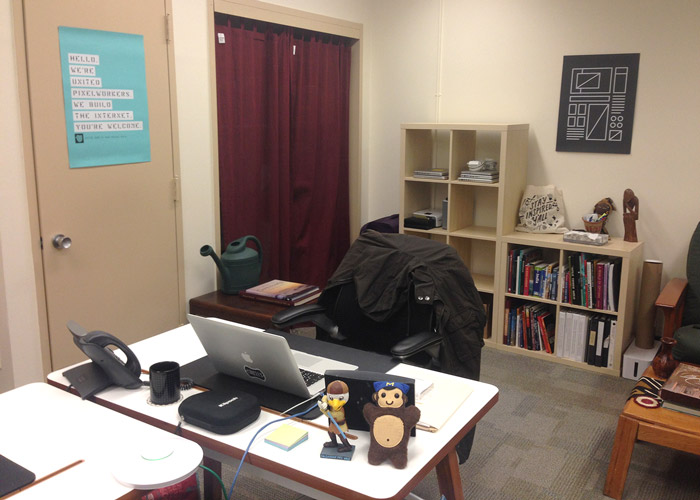 And now the linkroll – in the photo you can see posters from Ugmonk and United Pixelworkers, a coffee mug from Art Center, a tote from Circles Conf, my beloved chotskies from MailChimp and the Brooklyn Cyclones, and these desks my co-worker picked out for us from BlueLounge.

P.S. If you want to come work with us, we have openings for a full-time Tech Coordinator and a Tech Intern.

→ Heroes Often Go a Lifetime with No Recognition

When I meet with someone for the first time over coffee one of my common questions is to ask what the person would like to accomplish in the next 5 years . . . Amazingly, no one has ever answered by saying, “I’d like to do something hard that no one will know about.”

Gulp. That was convicting. Time to get back to work.

→ Some Will Seek Forgiveness, Others Escape

There’s a lot of songs / artwork / films that have moved me, but only a handful I can sincerely say have pulled me through a time in my life.

This song is one of them.

In addition to soaking up as much knowledge as I can about CSS architecture, I’ve spent a ton of time recently learning more about front-end performance.

Harry Roberts excellently rounds up and explains here in detail a lot of the strategies I’ve picked up over the last few months, plus a few more. He covers markup structure, parallelisation, prefetching, gzipping and minifying, among other things.

Definitely a must read for anyone diving into this topic.

One of the things I love most about the work I do is that I’m constantly learning.

As I work on web applications long-term more and more and my role shifts from being a “designer who can develop” to a “front-end developer with a background in design”, writing better CSS is constantly on the front of my mind.

And by better, I mean CSS that scales across an application more easily and presents content more beautifully on more devices, both past, present and future.

I’ve been soaking up as much knowledge as I can. There’s been a lot written about this subject lately, but Jonathan Snook’s book and Harry Roberts’ article Code smells in CSS have stuck out as being especially helpful to me.

This fall I released my first two JavaScript plugins on GitHub. They’re both rather simple, but I find them really helpful in my work and my hope is others will too.

My usual way of handling tables for narrow viewports in responsive layouts is to convert the cells into block elements. This is very easy to do with CSS and I find the table usually remains very readable, except when the table has a header.

Instead of being on top, the header cells now need to be repeated multiple times inline next to each of their respective body cells.

Responsive Table Headers is a jQuery plugin that automate this DOM manipulation on the browser side and keeps the markup cleaner and more semantic.

Check out the code, docs and demo at the GitHub repo.

I pre-ordered Symbolset as soon as I saw it. The idea to make a semantic symbol font for the web using OpenType ligatures was brilliant.

I quickly found myself using their star symbol in ratings systems. With Sybmolset, you literally put the word “star” in your markup when you want to show a star. For ratings, i would rather output the more semantic and backwards compatible “4 stars” for a rating instead of repeating the word star multiple times.

Format Symbolset Stars is a JavaScript plugin that automates this DOM manipulation on the browser side and keeps the markup cleaner and more semantic. If you have Modernizr installed, it checks for support of @font-face before making the manipulation.

Check out the code, docs and demo at the GitHub repo.

I spent my teen years in a pretty rad city…

→ Joy: The Fight vs The Dance

The “dancing” at SOMA was easy to learn. Throwing my fist in the air with the rest of the pubescent throng, I found that I could fit in just fine.

Needless to say, I loved this article, and the anecdote about the mosh pit at SOMA was just the beginning.

I do so often choose the fight over the dance, I settle too easily for insignificant victory instead of reverberant joy. I find it especially absurd that I do this in marriage, when I know “my wife and I are struggling for the same thing.”